Even you are not game lover, you might know the company “Nintendo.” However, how many people know the first products of this company? It’s “Hanafuda(花札)”, Japanese origin playing cards. Today, I will introduce the world of Hanafuda. 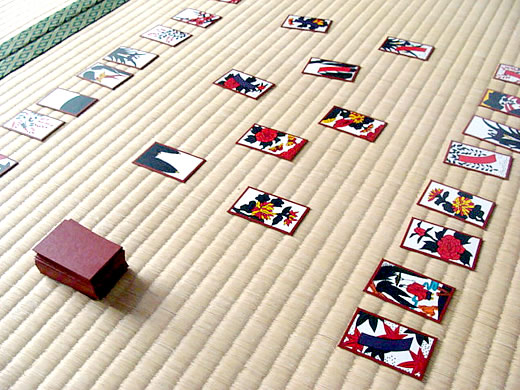 The history of Hanafuda starts in 16th century, the playing card which originally from Europe had carried by missionaries. This cards game eventually became popular mainly in gambling. However, it was banned in 17th century, because the government had a fear of changing religion and completely closed off contact with the Western Christian world in 1633. This is a so-called “Sakoku(鎖国)” in Japanese.

Although the cards were banned, there are highly demand on using this cards for gambling. This structure prompted people to alter the playing cards to Japanese version, and subsequently, it became the card “Hanafuda”.As mentioned above, this cards was the first products for Nintendo. This company was also reflect this trend of the times.

Let’s get back on track. Hanafuda had developed by regions or communities and it became to have too many rules to grasp the all of it, because this card game was mainly enjoyed in gambling with limited members. This is because, there are many Yakuza movies which gangs playing Hanafuda as gamble. In addition to this factor, the government banned gambling, so it made playing environment more closed. The gamble which include using Hanafuda, is still banned. However, Hanafuda is still popular card game because of its beauty. You should remember some complex rules to enjoy this card game, however the picture of cards will encourage you to remember the rule of Hanafuda、because it is so beautiful.