If you’ve been in Japan for a while, you will most likely have visited at least one Shinto shrine. Or perhaps a Buddhist temple. (The difference is huge, but at the same time small, and will leave that for another time). Perhaps you have seen a shrine where there are foxes on pedestals infront of the actual house for the Kami, and have wondered what the deal with the foxes are? Well, one thing you can know for sure is that the shrine that you are looking at is in honor of the goddess Inari.

Inari appears to a warrior (Photo courtesy of Wikimedia Commons)

Inari is the Shinto goddess for foxes, fertility, rice, sake, and agriculture and industry. In earlier times, she was also the goddess of swordsmiths, and merchants. Inari has been depicted as a male, as a female, and as an androgynous god, and is usually though of as a collection of 3-5 Kamis in one. Inari’s messenger is the fox, and that’s why at least a pair of foxes decorate the path up to an Inari shrine. The pair of foxes always represent the male and the female, and they usually hold something under or between their paws, like a jewel, a key, a fox cub, or a sheaf of rice. Inari shrines also have one or more red Toriis (the wooden or stone arches that mark the entrance to a Shinto shrine). 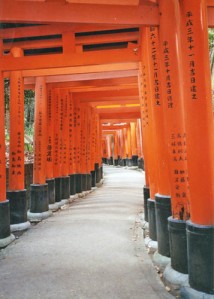 It is commonly thought that foxes in Japan loves fried tofu (油揚げ “abura-age”), and since foxes are the messengers of Inari (or sometimes Inari herself), sushi with fried tofu is named Inari Sushi. You can also find Udon noodles with the fried tofu, and this dish is known as Kitsune Udon (狐うどん “fox noodles”).

So the next time you pass a shrine and see foxes in front of it, why not give a little bow to Inari for the rice, the sake, and the booming industry, all the things that makes the world go round. And then go and enjoy some Kitsune Udon, or Inari Sushi. ^_^