A whoosh, an eerie screech, a puff and the fireworks display starts with a bang the kawa biraki, the river opening ceremony.

Predominant in the Ryogoku area were the amusements, temples and shrines so dear to the hearts of the common people.  The summer festival of “Hanabi” attracted hundreds of thousands.  It was an annual free show sponsored by the riverside restaurants and boat-keepers.

Originally, there were two main makers of fireworks, their contests of skill making the fete more interesting. These were the Kagi-ya and the Tama-ya.  After each burst, the grateful crowds shouted both names enthusiastically.  Their order of firing followed by a printed program on sale gave the names of the maker, the donator and the explosives specified name.

Unfortunately, Tama-ya one day, in a local celebration, accidentally set fire to one of the Shogun’s mansions.  For this his shop was suspended.  Irrespective, the faithful yearly spectators kept on repeating the names of Kagi-ya and Tama-ya. 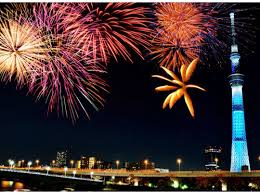 Congestion of traffic has today banished the Ryogoku display to the Tama River, where it is held in the latter part of July.