It is Japanese traditional festival to celebrate young girls growth and happiness which is held on March 3rd. 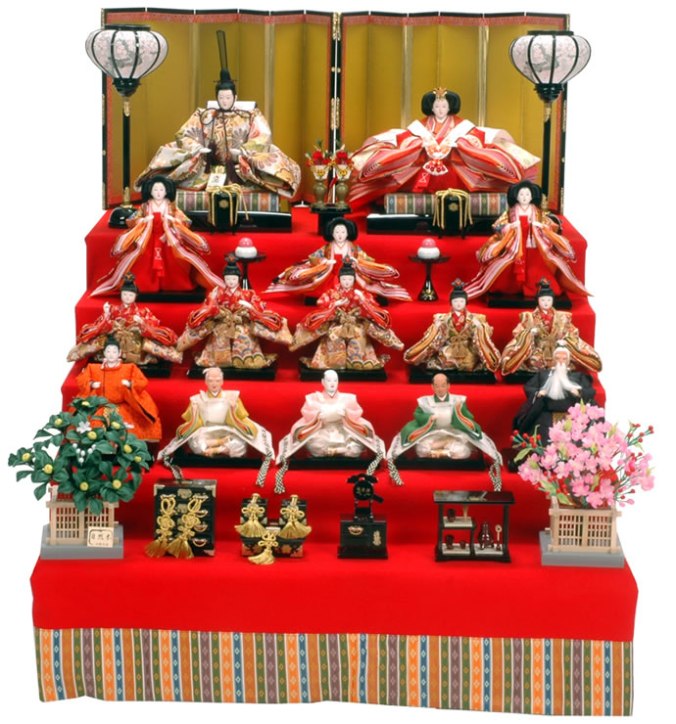 If our family has girls we display some dolls called  Hina-ningyo(雛人形) and peach branches for this festival. This festival also called Momo-no-sekku(桃の節句) because Momo means peach in Japanese.

Hina-ningyo is consisted with many characters.

A male doll and a female doll sit on the top of the others. He is the empire called Odairi-sama(お内裏様）and she is the empress called Ohina-sama (お雛様).On the step below of them there are three women called Sannin-jyokan(三人女官). Their jobs are to support the empress to live daily life.On the next step five boys called Gonin-bayasi(五人囃子) sit. They play instrument and sing songs.On the next step two men standing at opposite ends of the step are called Sadaijin(左大臣) and Udaijin(右大臣) , who are bodyguards of the empire and the empress and the other three men called Sichyou(仕丁) are from countryside to work chores at court.

On the left side there is a tree that has green leaves, white flowers and yellow berries. This is a mandarin orange tree Japan has had since ancient times. On the right side there is a cherry blossom tree. Shityou(仕丁) might have waited for spring to come and seen the flowers bloom while clean up the garden.

This is the dish for Hinamatsuri. We have some kinds of sushi which are Chirashi-zushi(scattered sushi), Temaki-zushi(hand-rolled sushi) and normal type sushi, and have Hisimochi which is a diamond-shaped rice cake, Hanaguri-no-osiuimono which is clam soup, rice cake cubes called Hina-arare and so on.

This festival has a long history. It was started about 1000 years ago in Japan. People believed that the dolls protected them from illness and diseases and threw paper dolls into rivers to drive off the ill luck. In the Edo period they began displaying the dolls for celebrating this festival.

If you are interested in this Japanese traditional festival, please try to display the dolls and cook something special for it!