As you may already know, Sumo（相撲）is the well-known national sports in Japan. We guess you have ever seen two big Sumo（相撲）wrestlers called rikishi（力士） fight in a ring called dohyo（土俵）. We can enjoy watching Sumo（相撲）both on TV and National Sports Hall（国技館）. 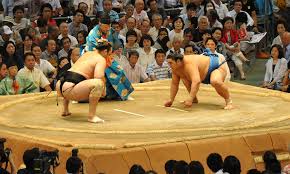 Sumo（相撲）has a lot of techniques to fight against, but if a wrestler（力士） steps out of the dohyo（土俵）or falls down on the ground, he will be loser of the fight. 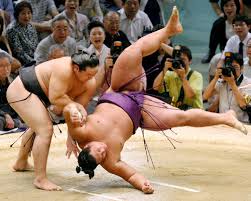 If you want to be a rikishi（力士）, there is some regulations. You must be at least 173 centimeters tall and weigh 75 kilograms. So they eat a lot to gain weight and also sleep a lot. 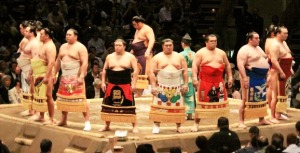 By the way, do you know what’s the purpose of sumo wrestlers（力士）’ oicho hairstyle? All of sumo wrestlers（力士）tied up their hair in a certain style called oicho（大銀杏）, but even Japanese people, most of them don’t know the meaning of it. The answer of this question is as follows. 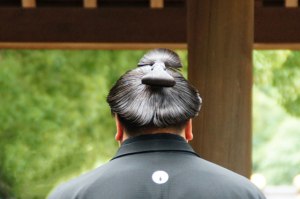 Oicho（大銀杏）’s hair style is not just a matter of aesthetics, but protects the wrestlers（力士）’ heads when they go head-to-head at the beginning of the match or if they fall out of the ring.

Sumo（相撲）is really interesting sport as so far. Why don’t you go to see Sumo（相撲）!!