If you have ever been to a store in Japan, you are sure to at least have seen the おにぎり(“Onigiri”). Even if you never bought them, or tried them, you have some form of idea what it is: usually a triangle-shaped rice ball, with sometimes weird fillings in it. And if you don’t master the Japanese language fully, the kanji-heavy names can sometimes lead to Onigiri-roulette: you go “Oh, what the heck, how bad could it be?”, you buy one, take a bite, and then realise it’s 梅干し (“Umeboshi”, dried and pickled plum) in it, and not that awesome ツナマヨ (“Tsuna-mayo”, Tuna and Mayonnaise) that you had last time. O_O

おにぎり might be known to you under other names: おむすび (“o-musubi”), or にぎりめし (“nigirimeshi”), or just simply as rice balls. common shapes of the おにぎり is triangular or oval, and most often you will find it wrapped in のり (“nori”, seaweed), but you can also find them in shapes like cylindrical, flattened spheres, actual ball shapes, and rectangular.
Common fillings are, but not limited to: 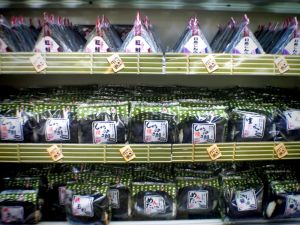 The earliest mention of おにぎり is from the 11-century diaries of Lady Murasaki. But the idea of the rice ball predates that by a long way. Before the use of chopsticks became popular in the Nara period, rice used to be rolled into small balls so that they could be picked up more easily for eating. From the Kamakura period to Edo period (ca. 1100’s – 1600’s) おにぎり was used as a quick meal. This made sense as cooks simply had to think about making enough onigiri and did not have to concern themselves with serving. These おにぎり were simply balls of rice flavored with salt. のり did not become widely available until the mid-Edo period, when the farming of のり and fashioning it into sheets became widespread. It is also known that samurai used to store rise balls wrapped in bamboo, as a quick meal during wars.

So next time you decide to play the onigiri-roulette, because you don’t know what the label says or because you just want to try something new, enjoy your meal, preferably with some tea, and maybe in a public park or near a canal, and think back on the history echoing back to our day through this simple piece of traditional fast-food.