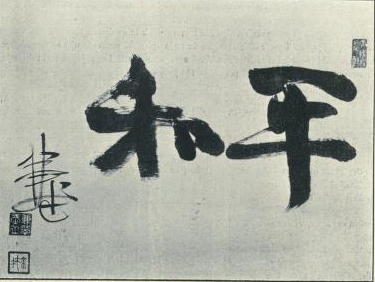 “Peace”, in calligraphy. Written by Oura Kanetake, in the Meji Period.
Photo courtesy of Wikimedia Commons

If you are interested in Japan and Japanese, you will most likely have stumbled upon the art of Japanese Calligraphy at one point or another, in one form or another. Japanese calligraphy can be everything from slender and beautiful, to thick, coarse, and almost unreadable to the untrained eye.

The history of the Japanese Calligraphy is (almost) as old as the history of the Kanji themselves. Once the Chinese characters had started to be standardized in the Qin dynasty of China, and the ink and paper replaced the chisel and stone, calligraphy was born, and new ways of expressing yourself in writing was also born.

With the spread of Chinese culture through out Eastern Asia, calligraphy also spread to neighboring countries, such as Korea, and to Japan. This happened in the 7th century. Anyone who was anyone in those days had to be able to know how to read and write Chinese, and that included the art of calligraphy as well. (A common likeness to the Latin of Medieval Europe is often drawn.) However, after a while, the Japanese had found that the Chinese characters all that practical to write Japanese with, and they developed the Hiragana and Katakana alphabets to fill the gaps that they felt was left when only using Kanji. In the 9th and 10th centuries, a style unique to Japan started to emerge. This was not solely because of the (then) fairly new alphabets, but also a way to separate oneself from China, and from the Chinese culture. The emperor of Japan wanted to establish that Japan was it’s own country, with their own culture and style.

Shodo is a living art in modern Japan still, with companies and stores wanting their names written in different traditional styles in order to reflect either the company’s heritage, or its design or focus. You find Shodo on everything from ramen shops to Izakayas (bars).

Next time you walk down the street, take an extra look, and see if you can see any Shodo around you. (My bet is that you will.)